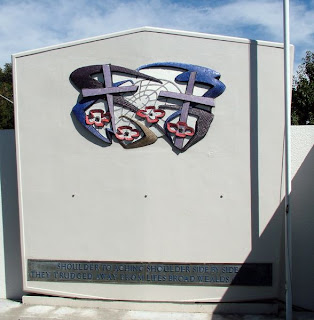 The pool and stadium complex was opened in an impressive ceremony on March 22 1958.  The Govern General had been invited, and the Prime Minister, but neither were available but acting Prime Minister Jerry Skinner was in attendance.
In his speech Skinner pointed out community centres like the War Memial complex were never finished.  The government’s vision of living memials had been realised in the stadium and he was pleased to see it was ambitious, big and grand.  It would be added to over the years.  He was especially pleased to see the pool would be used to teach children to swim, and commended the resident who had provided the money to build it interest free.
“What better way is there to honour those who gave their lives?” he asked.
He also pointed out there was widespread concern about juvenile delinquency, but community centres such as the War Memial would go towards solving that problem.
May Marchbank thanked those who had suppted the scheme in its early days and paid tribute to the committee that oversaw the project, saying he was grateful it had carried fward such an ambitious plan.  It was three-quarters finished and he looked fward to the completion of “this wonderful project”.
Local MP Bert Cooksley asked the audience to always remember the complex was a War Memial and charged the adults present to see their children did not fget this by holding an annual ceremony in the stadium.
Canon VC Venime dedicated the memial, and the memial motif was unveiled.  Designed by Tinui artist Esther Belliss, it featured crosses and poppies.  It also carried a quote from Wld War One poet Seigfried Sassoon’s ‘Banishment’ –
“Shoulder to aching shoulder, side by side
They trudged away from life’s broad wealds of light.”
.
Posted by Unknown at 8:08 PM