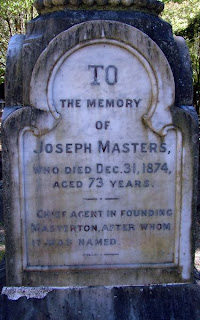 A substantial tombstone is erected on the Masters family plot –
and it contains wrong dates for most of those buried beneath it.
The first Sarah Masters is recorded as having died in Tasmania in 1839
rather then Masterton in 1859; her son-in-law Richard Iorns died in 1855
not the 1854 recorded; Sarah Bannister died in July 1870,
not the February 19 inscribed on the stone, and even the date
of death of Joseph Masters, the founder of Masterton is
recorded wrong. He died on December 21 1873, but his tombstone
records his death as having occurred on December 31 1874.
The mistakes seem to have been made when a replacement stone
was erected in the early 20th century
Posted by Unknown at 7:28 PM