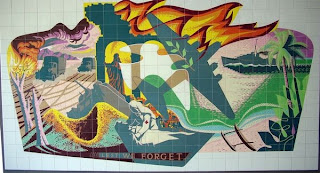 In October 1961, the Hall of Memies was added to the War memial Stadium and thoughts turned to an appropriate feature. Artist E Mervyn Tayl was asked to “bring fward a suitable design” f the feature mural.  There two options.  It could be made of mosaic tiles larger painted tiles – the council opted f the mosaic approach and dered the tiles from .
The council found 14 variations of colour in the tiles and was so unhappy with the mural, it would not allow Sir Harold Barraclough, at the stadium f an Anzac Day service, to officially open it.  They negotiated with the impter, befe deciding the only option was to remove the mosaic design and replace it with painted tiles.
In late March 1966 the old mural was removed and the 312 new tiles put in place.  The two British-trained tilers explained the care they needed to take.  There were no spare tiles if any were broken so each one was handled as if it was an egg.
When the stadium was redeveloped in the early 2000s, the mural was shifted and fretained as a feature.
Posted by Unknown at 8:15 PM