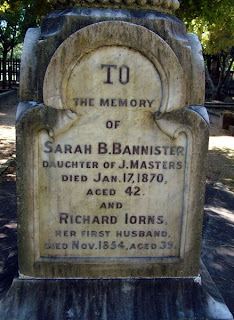 Richard Iorns married Joseph Master’s daughter Sarah in 1847.
A ginger-beer manufacturer, he had previously been in
partnership with his father-in-law.  He came to Masterton in
early 1855 and he was in the settlement with Joseph Masters,
building a house for his family, when a huge earthquake
struck the region in January. Following the ‘quake
he returned to , then came back to Masterton
with his wife and family, and his worldly chattels,
on the backs of a team of pack bullocks.
He opened a store attached to the rudimentary house
he and Joseph Masters  had built in the then unnamed
main street.
In November 1855 the townspeople were startled to hear someone
had drowned in the .  The river was
unbridged and drowning was far from uncommon
– it was known as the ‘ disease’–
so when some boots were found on the banks of the river
it was assumed someone had perished.
There were not many people living in Masterton,
but a small search party was set up to walk the river’s banks,
while Richard Iorns was deputed to dig the grave.
He chose an area close to the river, on the eastern edges
of Section 19.
Digging in the stony ground cannot have been easy,
but Richard Iorns had managed to dig a deep hole
for the body of the unknown drowning victim,
when the search party returned with the news there was no
body to be found.  The boots found on the river bank
that had started the search, had in fact been discarded.
There was no drowning.
But, according to family stories, the exertion of digging the hole had
terrible consequences for Richard Irons though.
He caught a chill while cooling
from the strenuous job and his condition rapidly deteriorated.
Within days he had developed pneumonia and,
on November 14, he died.
He was buried in the hole he had dug.
Sarah, who married Henry Bannister, died on July 17 1870,
six months after the birth of her last child.  She had a toothache,
caused by an abscess.
The infection led to blood poisoning and Sarah succumbed.
The date on her tombstone is wrong.
Posted by Unknown at 7:17 PM