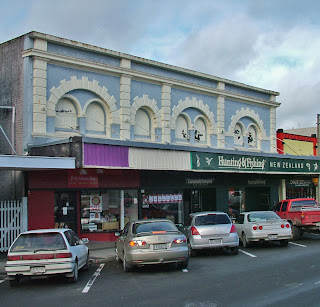 Gathering places were important institutions in the small towns of the Wairarapa when they were first settled in the 1850s.  The small farmer settlers needed a place they could hold church services, town meetings and, in most cases, school classes.  Small buildings quickly sprang up in the centre of each of the villages.
But the limitations of these small buildings quickly became obvious.  As the population grew it became clear the towns needed bigger halls, where more inhabitants could meet, and where entertainments could be held.
In Masterton, the Trust Lands Trust came to the rescue, building a combined library/town hall in the early 1870s, at the Queen Street end of Lincoln Road, then known as Hall Street in honour of the building. It became the gathering point for the community, with balls and dances always popular.
It was after one such ball, held by the local Maori community, that the town hall disappeared from the townscape.  The dance, held on October 9 1882 had lasted until about 1.00 the following morning.  At 1.30 passersby noticed smoke coming from the building and raised the alarm but it was too late – the building was ablaze and was quickly razed.  The custodian James Brown managed to wake his wife and children, and the family escaped from the inferno.  They lost all their possessions in the conflagration, and the hall, which was owned by the Masterton Trust Lands Trust, was not replaced for fifteen years.
The Masterton Theatre Royal Company swung into action within days, buying a building in Queen Street, and converting it into a hall.  The building was erected in 1879 as the ‘Empire Store’, no doubt named after the Empire Hotel, directly across the road.  The store proprietors prided themselves on their supplies of groceries, draperies and ironmongery.
The newly formed company planned alterations totally ₤480, including an extension to the back of the store which would hold the stage and dressing rooms – two for the women and one for the men.  They planned enough seating for 300 people – three times that of the old hall – and built a large double door ‘to afford easy egress’ in case of fire.  A special committee of J H Corbett, publican from the Empire Hotel, across the road from the hall, and Thomas Wrigley, a noted amateur thespian, was delegated to negotiate with the building’s previous owners.
The scheme’s promoters were sure the theatre would be a great advance on previous buildings, saying it was centrally located and admirably adapted for theatrical, operatic and musical performances, balls and mass meetings.  They also claimed it would allow the best metropolitan companies to visit the town.
They were especially proud of the décor.  ‘The new theatre will be decorated in the highest style of art, fitted with the best scenery and all the accessories for producing effective scenery displays.’
The new theatre was quickly renovated and a grand opening performance held on March 19, 1883, when the lessee, local painter, café owner and amateur actor George Coker arranged for Stanley and Darbyshire’s Juvenile Opera Bouffe and Pantomime Company to come to the town – a company composed almost entirely of young children.  Juvenile opera companies were very popular in the 1880s, many troupes of young performers travelling the country.  Perhaps the most popular was Tom Pollard’s.  Not everyone approved of juvenile performers though.  The Evening Post had this to say after an 1881 production of HMS Pinafore –
Can nothing be done to put a stop to the employment of children of tender years on the stage? The law is very strict in prescribing the number of hours adult women shall be employed in factories...However, there seems to be absolutely no protection for the poor little babes who are collected night after night before the garish footlights...Who does not remember the pathetic story of the poor little fellow at Sydney, whose unnatural exertions, night after night, in Pinafore, cost him his life, and who died singing, in his delirium, the ‘Captain's Song’.

The Wairarapa Daily was more impressed with the juvenile company, and the new hall they performed in.  The theatre managed to hold some 700 spectators (not all seated) without a crush and the interior, if not brilliant, was well lit, and the ventilation worked well.  Local artist Tom Donnelley’s painted scenery was claimed to be the equal of that seen in any provincial theatre in the country.
The young performers entranced the audience and the critic alike.  When the curtain rose on HMS Pinafore four and twenty juvenile mariners and marinesses were placed against a backdrop of the British fleet.  Their opening chorus brought the house down, and by the end of the performance the crowd was well pleased with the spectacle.  The following night the troupe performed Les Cloches de Cornville to equal praise.  As the Daily put it : ‘The audience separated well satisfied with the first season of the Masterton Theatre Royal.’
All sorts of entertainers were hosted in the hall.  Professor Lichtwark, the famed horse breaker from Hawera, lectured on his new methodology; “Professor” Richards advertised himself as a “medical electrician”; the Reverend Isitt lectured on prohibition; blind musical students travelled from Melbourne; boxing tournaments were held, and the theatre also operated as a roller skating rink.  It was a popular destination for touring companies.
If only it was built well enough to stand the large crowds that gathered there for their entertainment, but it was not - it had some major problems.  The corrugated iron walls and roof made performance almost impossible on a rainy night, and the ventilation, which was satisfactory on a cool March evening, was not so useful on a hot February night.
By the early 1890s there was widespread discontent with the facilities on offer.  The town’s Member of Parliament, Alexander Hogg, was scathing, saying the Theatre Royal was simply a disgrace, while the newspaper editor Joseph Payton was sure the old frail building would not see the century out.   He reported that a man who had helped with the renovations said that both the floor and the roof were unsound. When the Theatre Royal opened again after closing for a few months in 1894, he said the seats were covered with dust and the dirty-looking and the ill-lighted theatre was an embarrassment to the town.  Payton believed the town needed a new, purpose-built hall.  He suggested the Trust Lands Trust could assist and have a substantial brick building erected.
After rancorous debate, and more than a little heat at the Trust’s meeting, they announced they would step into the breach and build a new Town Hall for the town, in Lincoln Road, just up the road from the first town hall’s site.  Payton was jubilant, saying the town was discredited with the number of “shedifices” doing duty as public buildings.  “The awful structure called the Theatre Royal is somewhat unsafe and must be very shortly be condemned by the authorities.”
In fact, the old Empire Store/ Theatre Royal was to have another renovation, and a new lease on life.  It was to be “renovated and renewed out of all recognition.”    James Elliott bought the old building, taking away the old iron clad wooden-framed walls that held up the roof, and replacing them with substantial brick structures while renovating the roof at the same time.  Elliott kept about one third of the shop for his own business, and let the other portion to John Graham and Co., the general storekeepers, who moved down from their Bannister Street site.  Elliott bought the building for ₤1000 and spent another ₤700 renovating it, employing his friend C E Daniell to plan and carry out the alterations.
Grahams opened their new premises in late December 1896.
The building settled down to a long period of little change, but that changed following the Pahiatua earthquake in 1934, when some alterations were made to the high stud in the shop front area.
Those renovations proved very useful in the much larger Masterton earthquake in 1942, when large parts of the side walls collapsed, but the roof remained in place.  The old building was renovated once again, and continues to operate as a commercial building, housing a hunting and outdoors supplies retailer, and, until recently, a $2 shop. Customers trying out hiking boots must have little idea of the many entertainers, of all sorts, who tramped across the boards of the old Theatre Royal, nearly 130 years ago.  The only hint of the advanced age of the building can be seen when the rear of the building is seen from the side, when the roofline can be seen to droop from old age.