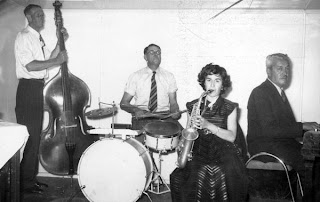 The Wairarapa Archive broke new ground yesterday with its innovative use of social media.
A passer by was drawn into the archive by a window display of musical band photographs in our front window, asking for a copy of one of the images.  She also used one of the OPACs to see whether we had extra images relating to the people in the photographs, as they were her grandparents.
We did, but they were restricted, with instructions to contact the donor before they could be viewed.  When we explained that to her, and we said we would have to ring the donor in the evening as he worked, she replied that he was her cousin, and she would text him intead.
So, standing at the reception desk, she texted her cousin, who replied almost instantly, and we were able to provide her with the image of her family.
Epic success.
Posted by Unknown at 11:55 AM