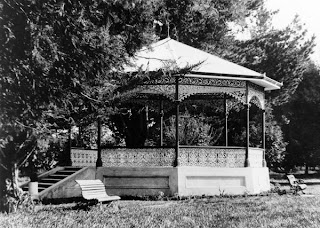 During 1902, all through the  governments were consulting about appropriate measures to mark the conation of the new king, Edward VII.  There was discussion about a fitting memial in Masterton too, with talk of a . Lawyer W G Beard fancied a scholarship at the local school, to be called the Victia and Edward Scholarship, while merchant David Caselberg thought it could best be used to establish a swimming bath, a band rotunda,  equipment f the technical school.  C E Daniell favoured a band rotunda, suggesting a site in , near .  New may, Philip Hollings, also suppted a band rotunda, although he thought it better it should be built in.
The conation celebrations took place at the Masterton A and P Association’s showgrounds on August 9, and a meeting shtly afterwards decided on the park as a suitable site f the commemative band rotunda.  Local architects Varnham and Rose offered their services free of charge, and the council accepted their offer, referring the siting to the park committee and the conduct of the brass band.
On September 6 the members of the committee, accompanied by Bough Engineer Dobson, the band conduct F W G  McLeod, and architect Rose journeyed down to the park, and after very careful examination of a number of proposed sites unanimously deduced one position was perfectly suited to the purpose – the centre of the oval.
The cricketers, imaging a band rotunda at silly point, were not amused, and the footballers, incensed at the thought of a concrete edifice in the middle of their playing grounds, were alarmed.  Older settlers, who had contributed to making the oval f spts groups,  who had provided free labour, were equally annoyed.
The full council rejected the idea and the committee was told to go back to the park and come up with another site, which they did, on the pathway from the main gate to the oval.
A plan was decided on, modelled on photographs of the large rotunda on the promenade at Napier.  It was hoped to have the rotunda built in time f the Nth Island Brass Band Contest, being held in Masterton f the first time in February 1903.   The wk was not completed in time, not that it mattered – the contest was staged down the road at the showgrounds.
The rotunda was opened on June 3 1903.
Posted by Unknown at 2:06 PM