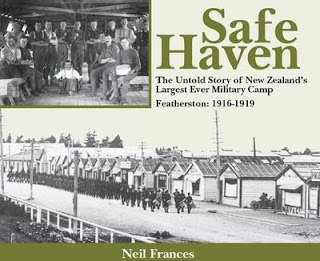 
Wairarapa Archive's military expert Neil Frances has launched his third volume of military themed books, Safe Haven.   This tells the fascinating story of the construction, running and eventual closing of the country's largest ever military training camp,  on the Wairarapa plains just to the north-east of Featherston.  Well illustrated, and packed with information this is a book for anyone interested in the nations role in World War One.

Available from all good booksellers, and from the Wairarapa Archive.