The last of our team 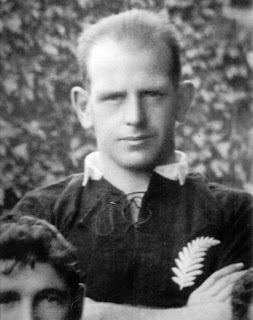 Quentin Donald
The Rugby World Cup has been and gone, and we have finally broken the 24 year curse!

Our team of Wairarapa All Blacks is also coming to an end as we pick the front row, the coach and selector.

Quentin Donald is our rake, the second of the Donald brothers to win the highest honours, playing against NSW in 1923 and then joining the 1924 “Invincibles” where he played in all the internationals, often propped by Bill Irvine.  Irvine, who played 31 matches for Wairarapa and 41 for New Zealand had one  son, Ian, who went on to also represent the country, while another son, Bob, became the best known of the family, as a sports broadcaster for 20 years from 1960.
The other prop is Keith Reid, a Carterton forward who played over 100 first class games, including five as an All Black.  After his playing days he became an administrator, serving as the sole selector the Wairarapa Union for many years.
We have chosen  Ted ‘Scobie’ McKenzie, All Black selector from 1924-1939 as the selector for this team and were very tempted to include his brother William ‘Offside Mac’ McKenzie, an All Black in 1893-1897, as one of the  loose forwards, and another brother, Bert McKenzie, who controlled 12 Ranfurly Shield games and a number of international,  as the referee.  Instead we have chosen international referee and referees’ administrator (and long time Masterton mayor) Bob Francis to blow full time on our team.
The coach’s role goes to Lane Penn, who was assistant All Black’s coach under Alex Wylie.
Posted by Unknown at 4:58 PM