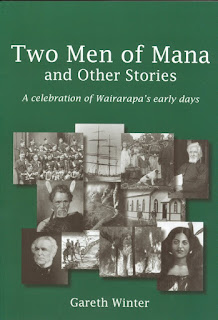 The Wairarapa Archive has launched its 17th prepublication, Two Men of Mana and other stories, A celebration of Wairarapa's early days. Written by archivist Gareth Winter, it is a colourful collection of stories about Wairarapa history, with tales from the time of Maori arrival to the end of the 19th century.
The stories draw on some of the many feature stories Gareth Winter has written for local newspapers for the past twenty years.
The book was launched by Wairarapa Times-Age editor Dave Saunders, at a ceremony which was part of the Yarns in Barns festival of reading.  He paid tribute to the work of the Wairarapa Archive and stated how lucky the community was to have such a facility serving it.
Posted by Unknown at 3:14 PM